What a difference a school district and a state line make.  It's a whole nuther world west of State Line in Johnson County, Kansas.

Poor KCMO citizens, especially the ones in Hyde Park --too close to Troost.  Rampant crime. Not just black on black crime, now it's agressive confrontation and stealing of cars and beating up husbands walking their dogs.   By young hoodlums who cannot get a job at $7.75, let alone the $15 minimum wage that Tonyskansascity.com is lobbying for.

Meanwhile, folks in Johnson County are living an idyllic life.  Especially today.  Shopping shopping shopping the 10,000 discounted items today on Amazon Prime.  Including their elite home robot device, the Echo.  (Or the junior edition, the Dot.  Which comes with pastel themed skins to add a je ne sais quo to one's decor.)

Personally, I'm not buying Jeff Bezos' Amazon Echo. For today's Prime Day price of $89, vs. $149 regular.   It's a speaker that is not even stereo.  I'm also not buying the rival product you can't find on Amazon (isn't that restraint of trade?  Oh well, it's hot and I'm too tired to protest that)  the Google Home.

I'm not saying "Alexa, do this".  I'm also not saying "OK Google, do that."  I am too busy to have a robot.  Especially to tell it to turn on a light.   Or change the music.  Or look up a recipe, and even reread the last step. I'm from Iowa.  I'll just walk over and do those things myself.  I especially refuse to spend $40 per lamp or other robot-controlled device to get the interface.
I am too busy telling my goldendoodles, "Clue, stop eating your brother's poop.  Leave it!  Leave it!  You are a disgrace to your Perfect Puppy training."

And "Wonder, stop peeking off the deck.  Stop barking at those dogs who get walked by our neighbors who had to take a Valium and get out of the house because they were on hold for three hours with Tech Support at Amazon Echo.  Enjoy your deck and our wonderful yard.  I've told you a million times, we are not walking people."

Robots will be alot of trouble to train.  Almost as hard as puppies.  But mark my words, if the citizens of Missouri approve a $15 an hour minimum wage, that will be the greatest boon to economic development in the history of Kansas.  Businesses will swarm to Johnson County.

Heck, it's well known that most CEO's no longer live in KCMO.  They moved away from the crime.  Ray Kowalik --the Burns and McDonnell CEO who falsely brands himself as a "hometown boy" and who wants to build "the new smaller billion dollar 35 gate KCI" and pocket the additional $140 million in private bond funds for himself, Michael Merriman of Americo Life, and their Burns and Mac buddies--Ray lives in Lee's Summit.  The late Neil Patterson of Cerner, who died this week, didn't even live in Jackson County--he held court at Loch Lloyd in Cass County.

And you know what?  I bet Ray and Neil both had an Amazon Echo in their cigar-smoke filled living rooms.

Not me.  If I get bored, and need to order someone around, I will just put on my French maid's apron and pay myself $15 an hour out of my piggy bank, to turn on my own lamps.
at 1:11 PM 1 comment: 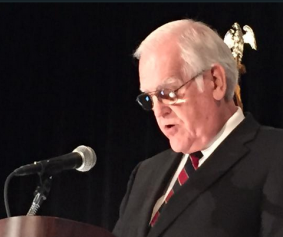