Renee Kelly's Harvest, an overpriced greasy spoon in Shawnee, by a pretentious chef who wants to move to KCMO

Renee Kelly's Harvest, is in the old Caenen Castle on Johnson Drive in Shawnee--west of Shawnee City Hall (Nieman) about half a mile. 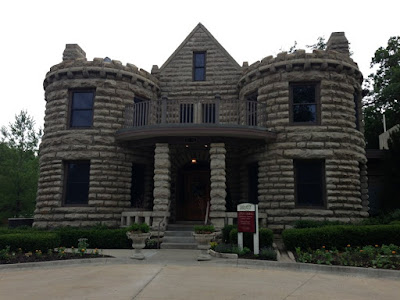 The building has also been a rest home, a night club and other things.

Renee Kelly's Mom told me, personally in 2003, that she bought the home to launch a career in food service for her daughter.  Caenen Castle, (sans the Renee) was the name at first.   She started at first doing catering, private parties and lots of wedding receptions.  The house, sans elevator, is beautifully restored.  It has lots of charm.  But on this Friday night, in the height of KC Restaurant Week, was largely as deserted as its former life as a haunted house.

Over the years, Renee's brand identity shifted from the ambiance to her personality.  She changed the menu from home cooking to feature a growing trend of "Farm to Market" cooking.  That means locally grown foods, mostly organic.  Renee is a bit stiff, like a scolding nun with a ruler, about rapping the customers' knuckles with this incessant message of virtue and health.  Her menu is so broad and changes so often it is described on numerous web sites as "all over the place".  Many online reviews call her food overpriced.  So I wanted to sample it during KC Restaurant Week, $33 for dinner or $15 for lunch.  I defy you to find that menu online.  She signed up at the last minute, long after the first 100 restaurants were committed to the charity event, and many places had already booked up for the 10 day season.

Let me ask you this: when you feature just three entrees for the special, {rabbit ravioli (3 to a plate); clams and mussels (a meager 10 count) and baby back ribs with barley risotto}, how in heck does a competent chef with integrity run out of the ribs , at 6pm on Friday night?  Even Aldi down the street had raw ribs, if that is what you lacked.

One had to plan ahead early that morning, to substitute with a far lesser cut of meat, brisket that needed to be marinated in sarsaparilla.  And the $33 special cost more than most things on the regular menu.  Quite the opposite of the six other fine dining places I visited this week.  They offered a deep discount.

Renee is ambitious.  I'll give her that.  I followed her this season on Bravo's excellent series, Top Chef.  Renee won the first Quickfire challenge.  This gal can chop up a tray of 30 whole chickens into smaller pieces, I tell you!  Whack, whack, whack!!!

While she was then voted first to leave, as was KCMO's Debbie Gold, a truly charming, creative and self-effacing chef from several seasons back, Renee Kelly demonstrated enthusiasm, confidence and sass. 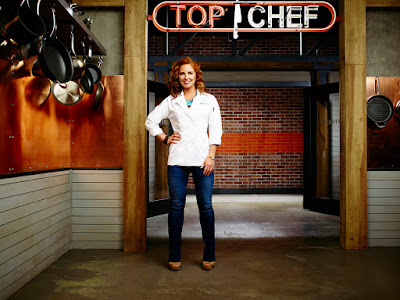 One wonders why chefs leave their business for a month to appear on Top Chef.  It became clear to me that Renee has her eyes set on whatever will land her a choice second location in the heart of KCMO.  Because when she introduced herself, she never once mentioned that her flagship--and ONLY-- restaurant at the moment is in Shawnee.  KANSAS!   Hands on her hips, stuck out at a jaunt, tossing her auburn curls, it was: "I am Renee Kelly, the sassy chef from Kansas City MISSOURI!"

(Excuse me?  She is not.  No restaurant there, no license, etc.  And not even a tax subsidy, tho of course everyone asks.)  The very personable waitress, Claire, added, "Nobody knows where Shawnee is."  Well that's not the point, when you are trying to brand yourself as being not from a major market.

I do recall in the early "aughts", when Renee and her rah-rah stage mom first approached me at a Chamber event, to intercede with the codes officials and planning staff at the city of Shawnee about opening Caenen Castle as a public restaurant.  (I was the elected president of the Shawnee City Council then.)  They had the big head about expecting the city to completely ignore or break all their codes.  To hear tell, Renee's Mommy wanted the city to condemn adjacent land for a song, so they could magically and cheaply meet the city's firm and inviolate requirements for offstreet parking.  Or just make life easy: to commandeer onstreet parking, currently in use by the existing neighbors, to suddenly post it from 5p-10p as as Private Parking for Caenen Castle only!

And I quote: "Do you realize just how talented my daughter is and what she is about to create??  For this little town??"

To Shawnee's credit, we maintained our requirements.  And did not 'give away the farm' to the eventual Farm to Table/Contemporary American restaurant.  Perhaps that's why Renee Kelly's 'Harvest' (forget the Castle) is now rebranding and seeking greener pastures in KCMO, the lush land of abatements.

Oh brother.  I'd love to be a fly on the wall if Mommy Kelly tries to negotiate with the other queen of entitlement, Shirley Helzberg, (above) for Renee Kelly to now be handed a tax-abated signature site downtown in Greedy Shirley's tax-abated development in the Crossroads.  For BNIM Architects, who cannot keep a straight face by threatening to move to JoCo if their ladidah millionairess landlady-first-time-developer doesn't get her $5 million tax break?

Now that would be a dish: Filet of Catfight on Green Dirt Farm greens, with raspberry vinaigrette.

OK, so how was my actual dinner at Renee Kelly's Harvest in Caenen Castle in Shawnee?

Horribly greasy.  Both the substitute brisket with greens;
and the duck (regular menu) with gooseberry schmeared on
the plate like blood from a crime scene.
Over-seasoned.
Over-priced.
Absolutely wonderful waitress, Claire.
Adele songs over the PA.  "Hello?" Pretty sure that's illegal...

You know what, Shirley Helzberg?  And Sly James?  You can have her.