"Hanoi Heather" Ousley is Dangerous Union Organizer Who Will Ruin SM School Board, Gerrymander Boundaries and Deputize Our Kids as Junior Social Justice Warriors! Vote instead for Mandi Hunter.

"Hanoi Heather" Ousley wants to play politics with Joco's biggest investments--our homes--through gerrymandering school boundaries.  She promised Sat. at the debate-- to handcuff smart affluent kids into artificially inflating school test scores.  That includes MY neighborhood school, Shawanoe at 75th & Nieman in Shawnee.  It's smack dab in the growing heart of subsidized apartments, (formerly called Section 8) for citizens and illegal immigrants alike.  At Shawanoe, 28% of the kids speak 17 OTHER LANGUAGES THAN ENGLISH!  And school board candidate Heather Ousley is willing to handcuff and dragoon our little kids into being teacher's assistant--to teach English to kids at Shawanoe.  Meanwhile, many other children are not getting much attention, because we all know, class sizes in Shawnee Mission schools are too large.

This social engineering experiment failed miserably in KCMO.  Did we learn nothing??
Despite statements and inferences from Hanoi Heather and another socialist/union candidate, Laura Guy, students do not "learn better" in a school that is excessively diverse.  They made that up.

Using kids as unwilling pawns for social engineering is WRONG.
Using GERRYMANDERING of district boundaries for cavalier social experiments and manipulation of test scores is UNETHICAL AND HIGHLY DESTRUCTIVE TO MAINTAINING PROPERTY VALUES!

None of this would be an issue in the more prosperous Blue Valley School District in southern Johnson County--because they don't have Title 1 low income schools.  All those kids walk to their neighborhood school.  That's why parents bought where they did!

In Johnson County, we all believe in diversity to a point.  In my own HOA, my immediate neighbors are a great mix of folks who maintain their property and support kids through higher learning to good careers.  They include Hindu, Muslim immigrants who escaped the Shah of Iran and speak Farsi, gays, Catholics, African Americans, Armenians, Mexican American citizens, atheists, mixed families with foster kids, rednecks, retirees...and me.

To the Bernie Sanders liberals in Northeast Johnson County, I'd say this:  Of course you support diversity.  But it is mostly INTELLECTUAL DIVERSITY, because Fairway, PV and Mission do not have low income subsidized housing totally surrounding YOUR neighborhood grade schools!  (Like we have at Shawanoe.)  You do not have any ESL schools at 28%.

"Hanoi Heather" is a Merriam Democrat whose misguided extreme Liberal policies are not in line with homeowners' goals.  She will ruin Johnson County property values for the 82% of residents who do NOT have kids in SMSD.  While quite pleasant one on one, if you hand her a microphone, Hanoi Heather turns into a belligerent harpie for the NEA Teachers Union (Never EnoughApples!): Listen to her badgering Hillary style speech in Topeka on her web site.

Full funding is really teacher union code for endlessly more money.  But that's not the solution.

"Hanoi Heather" Ousley's day job is a civil rights attorney for HUD.  So her paycheck comes from HUD;  while her husband Jerrod's paycheck comes from being a Democrat state rep in Topeka.   And now this family is so narcissistic they think they also need to boss around our School Board? 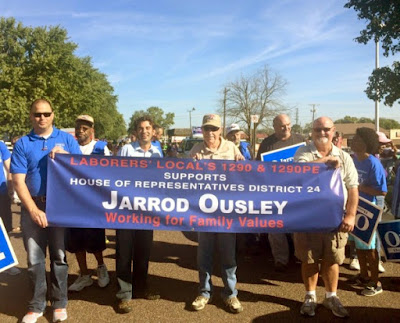 Union organizers from Mo marching for Jerrod Ousley.  Wife "Hanoi Heather" Ousley is ALSO endorsed and funded by Tri-County Labor Council.  This "Bill & Hillary" wannabe power couple is on a rant--willing to disrupt the rights of homeowners to preserve and protect their property values in Joco.  They are on the record, willing to use gerrymandering of district boundaries, and using little children to be dragooned into serving as Junior Social Justice Warriors.


Ironically, Hanoi Heather doesn't walk her talk--she moved her three kids out of her husband's district's Nieman Elementary--a Title 1 low income school, to a non-titled school.  Allegedly, one child had a hearing problem.  But not all three!  One must "state a reason" to move a child out of their assigned school boundary.

Thus, the Ousleys used their political influence to move all three of their kids out of the elementary district represented by their Dad.   Ousley's opponent, Republican Mandi (Serrone) Hunter has a child with a hearing deficit--but KEPT her child in the assigned school.  Hunter's father is famously likeable Lenexa Councilman Lou Serrone.

Listen to the one hour debate, or just start at minute 17--
where Hanoi Heather feared Shawanoe would "lose half the PTA" if my HOA, Seven Hills, was allowed to be rightfully reassigned to Mill Creek, where ESL is just 3%.
Oh the horror! Ousley feared half the PTA would be lost!

Finally, I had to laugh at this PTA nonsense.  We don't play games with property values because a few PTA Moms lobbied to keep their "identities" and power and social cachet at the school where nobody else wanted to serve.  Wahhhhhh!  There's no crying in PTA!

---
Editor's note:  10/27/17
I just received a second comment after Ned Scott was allowed to leave his comment.
It appears HERE, because like the second commenter, I can't get Blogger to post it.  I happen to agree, that it was OUSLEY who acts like Hillary Clinton who used her privilege as the wife of a state rep to pry THREE of her kids out of a Title 1 underperforming school! In fact using the disabled child as her wedge to sneak the other two reassigned.  That's disgusting.  For her own "convenience".  Ousley's actions demonstrate clearly she thinks the rules don't apply to her.

"Tiger Mom"??  Mr. Ned Scott, it seems Ousley meets your notion of "Tiger Mom," not Mandi Hunter.  OUSLEY is the one sending all of her kids to a school outside their attendance zone.  The facts are: Hunter's kids attend their assigned school, like most people do within the district.  Mandi Hunter is committed to the serious change our district desperately needs.  Hunter is already posing questions and proposing policies to enhance accountability, digging deeply into district policies and methods to make decisions in the best interests of the students and everyone else who supports this school district, from teachers to taxpayers.   We all want a great education for ALL our kids.  And Hunter has the courage to check the administration's supersized salaries--so we can lower class sizes.  We need to stop the steady exodus of middle class families to Blue Valley.  The actions of our privileged scheming school board are costing ALL SMSD homeowners tens of thousands of dollars in lost resale value.  Ousley is all about herself in her galloping ambitions and publicity stunts."