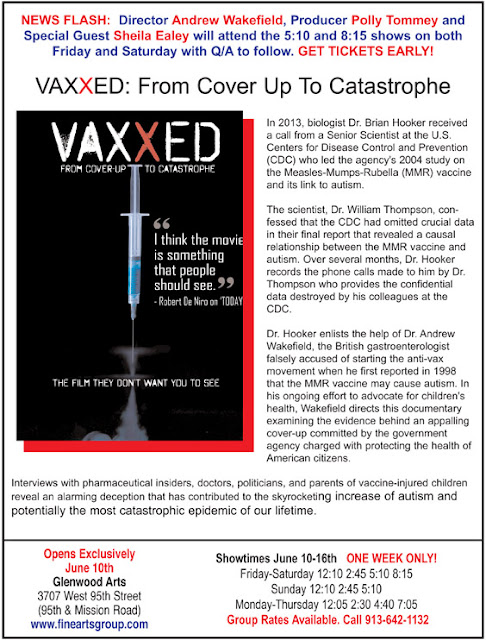 In the history of the Glenwood Arts, they've never pre-sold 613 tickets for a one week showing of a documentary.  AND Brian Mossman and Ben Mossman, owners, have scored THREE guests for a Q&A, this Fri and Sat, at both the 5:10pm and 8:15 showings.  This is big.

Now you may think you know what you know, about the vaccine/autism connection.  But are you willing to listen?  Dr. Wakefield is controversial, I admit.  But committed to connecting the dots regarding autism.  He's a bit Nelson Mandela--lost his medical license in Great Britain, moved to Austin.  Kept investigating.  Finally SOMEONE spilled the beans about the CDC coverup.  They just flat deleted evidence about the MMR measles vaccine.  Wait till you see the charts!  Autism, including Aspergers Syndrome and the whole "on the spectrum" disorder is epidemic.  And VAXXED:From Coverup to Catastrophe makes the prediction that if we don't fix this, by 2030, 80% of all boys will have it.

Do I think the CDC lies?  Absolutely.  They covered up and refused to deal with HIV/AIDS for political reasons, allowing millions of gays to die.  It wasn't until little teen Ryan White, a straight hemophiliac, got it from a blood transfusion, that America woke up.

Same with Lyme Disease.  The vaccine community, which is headquartered in London, goes after doctor's licenses if they report--or treat--Lyme Disease.  Their henchman in Kansas is a German professor at KState.  Who is...wait for it...on the take, or should I say board, of some vaccine developers.  The goal there?  Fix the old bad vax, that killed people.  When they have the new good one, well guess what: the witch hunt will end.  See "Under Our Skin", another great doc about a health coverup, one I saw years ago at KIFF.  PS: Lyme is an STD, and it's in the blood supply now, with no affordable, accurate test.  JoCo govt. won't report it.  Too much risk and paperwork. 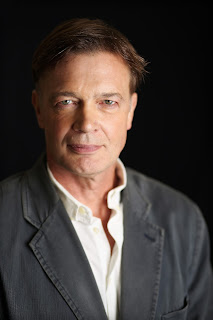 So Andrew Wakefield, is a dog with a bone.  Lost his license.  Became a filmmaker.  Might be somewhat annoying.  Who cares????  Kinda like Clay Chastain in Kansas City.  Who pushed and pushed for the streetcar.  While Mayor James takes all the credit.  That's how leadership is sometimes.
Oh yeah, let's not forget the Tuskegee Airmen. Our US Army secretly gave them venereal diseases and never told them or compensated them for 30 years.  Just studied folks using them as black lab rats.  Does our government lie??  You bet.

Does Big Pharma and the Vaccine Lobby have the power and the motive to suppress the facts????   To drive profits??  You decide.

Fri June 10 and Sat June 11, 5:10p and 8:15p for the Q&A's.  Huzzah to the Mossman twins at the Glenwood Arts for scoring this exclusive screening with THREE guests!!!!  And four Q&A's.  From experience, let me tell you: that's a huge deal.  VAXXED:From Coverup to Catastrophe was banned at Tribeca, but now has shown exclusively at 25 independent theatres around the country.  WE got the three guests!
Avoid lines, buy tix at fineartsgroup.com--under buy tickets, you must enter the date to get to the right page.        Thurs. June 16.

Forward this to everyone you know with a kid 'on the spectrum' or having a child.
Consider at least spacing out your vaccinations.  Do you think three live ones at once cannot interact badly?  Is it worth it?  I'm not saying no to all vaccines.  But let's fix this.  Now.

For more info, see our full website, www.jocopost.com.  And read a companion story on www.kcmopost.com