I love musicals--and so do many of the women who live with the good readers of Tonyskansascity.com.  And even those who sleep with the trolls there.   So here is a NO FAIL DATE NIGHT SUGGESTION for Tony's readers.  Courtesy of KC's local musical and theatrical expert, Bill Doty.

CABARET is one of those musicals you see again and again, not only if you have been out of touch for a long time (40+ years), but  to see how it is staged and performed.  Having been described as (Kansas City’s) John Kander and the late Fred Ebbs’ masterpiece, CABARET is one of  the best musicals ever to trod the boards.   Kander and Ebb (Cabaret, Chicago, Kiss of the Spider Woman) are already right there with the Sondheim,  Schonberg/Boubil (Les Mis...) and Sir Andrew Lloyd Webber as institutional forces in American musical theatre.  So, there you have them “Cabaret” and Kander and Ebb – venerable, indelible, incomparable.  Armed with that, you can take your seat.

Executive Producer Chad Gerlt and Artistic Director Sarah Crawfords’ just- opened Musical Theater Heritage (MTH)/Crown Center production of CABARET is an unqualified rave!
First, the concert-style musical format, a force unto itself, takes us to the madness of 1931 Berlin where we are constantly surprised and seduced.   Artistic Director Sarah Crawford’s masterful casting, directing and her use of the syncopated choreography of the late Bob Fosse (OMG, FOSSE!) are reason enough to get tickets now..  The play is sensitively enacted – as Nazism takes hold, we care about the storyteller (author Christopher Isherwood) as Cliff, his landlady, Fraulein Schneider, the androgynous emcee of club Kit-Kat Klub/his “girls,” and the unwieldy faux Brit, Sally Bowles.
I’ll leave theatre-goers to see these consummate performances, this incredible story – except to say that they are all stunning – perfectly researched and imagined – brilliant and (oops, a slip) Stefanie Wienecke as Sally Bowles may be the best Sally you (or anybody) has ever seen. 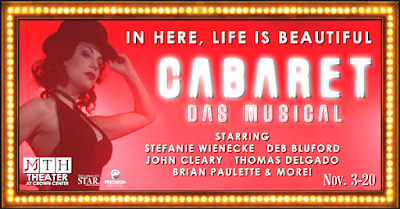 Doty postscript: I am booked to see CABARET at least two more times.


---
Tracy adds:
Bill Doty is not just some guy in a diner with an untrained ear and eye for theatre.  He has had dinner with Andrew Lloyd Webber in London.  He is a playwright with a current work in previews in NYC..."Children of the April Rain".  He worked in Hollywood and at the National Archives for 49 years--with all the Hollywood stars.  He's our version of Forrest Gump.  He knows everyone worth knowing.  Tennessee Williams once rang his doorbell at 8:30 in the morning, in his skivvies, holding out a coffee mug and asking: "Got vodka?"

And Doty buys his tickets.  These are not the rahrah writings of a reviewer sitting in the comped seats.  So when he says, this is the musical of the year, you can trust him.