All over town, I find folks in mourning for Hillary's loss.

To gain perspective, here's how to change the channel in your head.  Come to the final night of this town's best film festival, Kansas International Film Festival.  At Ranchmart South, 95th & Mission.

Here are my picks:

5:25  Dying of the Light
(No, it's not about the meltdown of the Democratic party!!!)  It's an excellent documentary about the fact that movies (and cameras) are now all going electronic--being made digitally, without the special qualities afforded by photochemical film.  This compares to the paintings of The Masters being no longer painted in oil.  It's a funeral for the past.  See how I related it to the thoughts on instant replay in your head??? 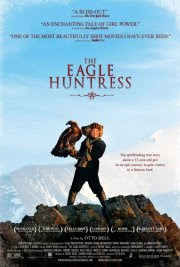 OR--
5:30pm  The Eagle Huntress
This is a sneak preview, and will have more screenings, starting around December.  A 13 year old girl in Mongolia becomes the first female in her family's centuries' old tradition of hunting, using giant golden eagles, atop horseback.  In deep snow.  On the steppes of Mongolia.  Which is really really hard to do!!!!  Harder than being paid to be a protester on the Country Club Plaza.  You'll see some of the best cinematography ever captured on film.  Stop feeling sorry about America!  Stop being afraid.  This might be the perfect film for you--and any brainwashed children who are crying today!!!  Stop watching TV news networks and liar-for-hire pollsters try to explain how they quit reporting and actually tweeted out insults and campaigned rather than reporting on our elections!!


OR--
7:35pm:  The Kandidat
A cynical black humor thriller, takes place in Slovakia during a presidential campaign.   Based on a novel about a manipulative game of promoting an unknown into the Presidency of a country.  Go figure:  Art imitating life!!!  This is why KIFF is such a terrific film festival.
Ironically, and no part of this film, Slovakia is right next door to Slovenia, the home country of our next First Lady--Melania Trump!!!  (I guess we have four years to figure that one out.)